Worst Days to Travel on the Roads Without a Navigation System 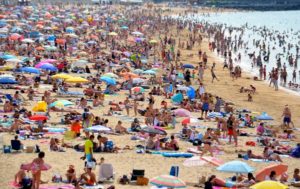 We’ve all found ourselves stuck in traffic every now and again, but there are some days which are much worse than others. Not only are these the days when you’re most likely to run into some massive traffic jams, but they also see the most accidents on American roads. Naturally, you’ll want to avoid traveling on the busiest days of the year, but if you can’t – that’s where a traffic navigation system can come in handy. That way, if you must travel on these days, you’ll be able to take a route that lets you avoid the worst of it.

By far the busiest days on the roads are Fridays throughout June, July, and August. As people flock to the airport to go on vacation, head to the beach to soak up some sun over the weekend, or just make the most of the beautiful weather, Fridays are the worst time to head out on the road without a traffic navigation system. Think about it- weekends are extremely busy periods anyway, and summer weekends are when people are most likely to travel. Put two and two together, and you’ve got a recipe for traffic slowdowns as far as the eye can see.

It’s an American tradition for the whole family to get together on Thanksgiving- and that means havoc on the roads. The AAA estimates that some 44 million Americans travel long-distance to see family over the long weekend, with over 90% of those traveling by car. Although many people think that the day before Thanksgiving is the busiest day to go, it’s Thanksgiving itself which takes the prize during this week.

These two dates mark the bookends of summer, and it’s, therefore, no surprise to hear that they are particularly bad for traffic. On Memorial Day weekend, tens of millions of people celebrate the start of summer by shaking off those winter blues and traveling somewhere for a fun day out in the warmer weather. The same thing goes for the Labor Day weekend, as countless Americans try to cram one last summer weekend in before the school starts and the cooler temperatures of Fall descend.

While New Year’s Eve isn’t quite as busy as some of the other dates on this list, it’s still a peak time for traffic, since people go to visit friends and family to see in the new year. What makes this a particularly deadly date that it’s the time when the most significant number of drunk drivers are on the roads as people often have had a bit too much to drink before heading out. For that reason, it’s advised that you avoid driving wherever possible on New Year’s Eve, to keep both you and your family safe.

So before you head out into traffic, update your car navigation system for the latest maps and points-of-interest.  Check out Navigation Updates and you’ll be on the road in not time.